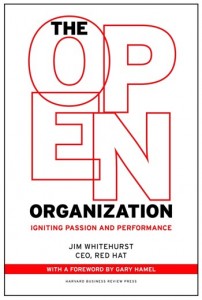 Disclaimer: I’m going to become a Red Hat associate very soon. This is nevertheless not a brown noser contribution, but pure passionated and personal opinion 😉

Why does working at so many large enterprises suck? Why do so many good fellas are mousetrapped with burn out after committing several years to a global player? Why can’t even a high salary compensate the frustration so people try breaking out of their S/VP positions founding new ventures? Why don’t vision and mission statements just don’t work?

There are many reasons for why it’s not fun working in a company with a military style leadership culture and why Tim Ferriss’ Four Hour Work Week became so exorbitantly popular.

When working for global enterprises, I often experienced the same feeling I had when e.g.

The ingredient missing here is basically: respect. It’s the ability of a company showing people either paying for their products or getting paid by the company that they don’t treat them as anonymous numbers but individuals.

But passion at the customer and at the staff side is key, especially for the millenials and younger generations who already found out that the American Dream is nothing more than a Fanny Mae scam.
We see (skipping the customer side and just pointing the curious e.g. to Lean Marketing, furthermore focussing on the staff related aspects) that younger generations want to produce something valuable.

Something more valuable than receiving the daily motivational teasers like “making the world better step by step” spit top down from the CMO into the organization.

In his book The Open Organization, Jim Whitehurst, CEO of the Open Source company Red Hat, describes how crucial passion is for organisations: In the long term the organisation with the more passionate people will beat its less motivated competitors. Whitehurst describes his way from being COO of Delta Airlines (an extremely hierarchical, top-down organization) to being CEO of Red Hat, which not only appeared to have a completely different business model than it’s competitors (just leave some thoughts about how you would make money based on a product that is freely available and distributable), but also with an “organic” culture of discussion and reflection that ignores the formely known hierarchical communication structures.

Despite of having a democratic decision structure where every employee (called “associate” at Red Hat putting the employer-employee relationship into a completely different relation) has an equal right to vote. Instead there’s a so called meritocracy where basically the person with the best argument gets more influence. And normally that’s the people being most closely related to a problem. They decide – like e.g. at Starbuck’s where the person who cleans the floor decides which cleaning supplies to buy.

For a C-level manager this means that instead of following a top down model – sending directives to his managers who then push it down to the organization – she/he has to transparently communicate strategic goals first and then ask for help. The message behind this is: “I want to go to this point. Could you please a) tell me if that’s a good idea and b) how to get there?”

For Red Hat this means seemingly endless discussions. The manager’s responsibility here is to extract the value, the actionable results out of such discussions. She/he acts rather as a catalyst. It’s no wonder that Red Hat’s mission statement – result of a very long discussion as you might imagine – highlights the catalyst role:

To be the catalyst in communities of customers, contributors and partners creating better technology the open source way.

That’s in my opinion a complete shift in management, in how to treat people (independent from whether customer or employee or – like at Red Hat – the contributors to all the open source projects that are the foundation of Red Hat’s commercial offering) and how to deal with their contributions.

The role of the CEO is more that of being something like the “first catalyst” (or “Catalyst Number One” == CNO).

I think becoming the CNO is the key challenge for 21st century CEOs. The more people will become aware of the culture at Red Hat and the companies mentioned in the book, the more want to be part of it. CEOs of traditional companies must create an Open Organization strategy pretty soon or they won’t have people doing the work.

Nevertheless, there are still questions left open in the book: How is performance management done? What about payment structures?

After installing the Git package on a Synology NAS I found out that the shell login was broken:

Just creating ~/git-shell-command lead to being forced to a – not working – git prompt.

ssh as system user to the server, edit /etc/password and change back the default shell from

As it seems, the people at Synology scrambled things up a bit: Not only it’s rather questionable if it’s a good idea to change the default shell for users w/ shell access with installing a version control system (even if it’s Git which reals powers do shine at the command line). They made it worse to not create a command filled directory ~/git-shell-commands for each user that got her/his default shell changed.

Hi, I'm Karsten, I blog on all sorts hacking, tech, arts, whatnot.
More on me…